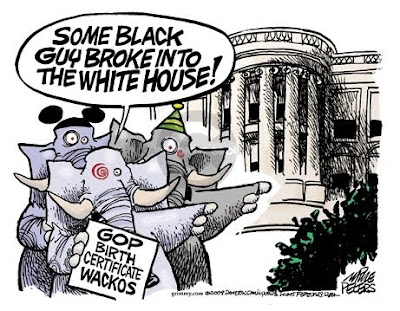 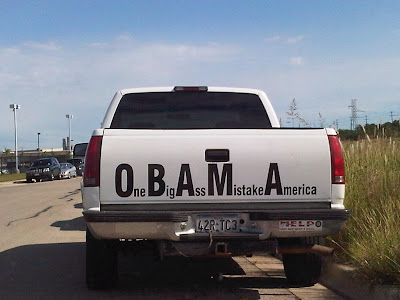 They simply call him "Obama" FAR more frequently than they do with the appropriate titles of Mr President, President Obama, or at the VERY least his full name of Barack Obama.......................... This is a level of casual disrespect that would NEVER have been tolerated during a white President's term ............ and we ALL know it.

No, it was pretty bad too when George Bush was in office, too.

I hear you about the disrespect. Bush had hs share too - but it seems the media is playing up Obama much more!

Agreed there; if the intent by Anderson Cooper, for example, was to show how out of touch with reality the birther you referred to was, that didn't occur at all.

I completely agree that there's a lot of disrespect towards the president, but I just wanted to clarify that in the US it isn't really that big of a deal to refer to prominent politicians simply by their last names, except maybe in formal journalism.

Personally, I refer to him as Obama more often than as President Obama, just as I've always referred to Bush, Clinton, Reagan, Carter, etc. It's because they're so well known in popular culture that their titles are assumed. Senators and and Congressmen are referred to more often with those titles by their name because people would be less likely to recognize them and their positions otherwise (When I say Reagan in a political context, everyone knows I mean the president, whereas if I say Roberts no one will be able to tell who the hell I'm talking about. It's also rare in professional journalism to hear Nancy Pelosi and John Boehner to be referred to as 'Speaker Pelosi' and 'Leader Boehner,' which are the appropriate honorifics. This isn't out of disrespect, they're just not as commonly used.

We don't do it necessarily out a strict, socially-enforced reverence for their titles, and the lack of that kind of a rigid custom in our culture is sort of part of our desire to keep the presidency less imperial than it actually is...

Also, the people in the American political world who are most likely to refer to the president by his full name - Barack Hussein Obama - are actually the people on the far right, who are doing it with the intent of stoking up ethnic and racial hatred in their base.

There is still a very strong undercurrent of racism present in the United States even to this day.

I've seen it with my own SO. He's black and I've seen people dismiss him simply because of that fact.

The birthers are racists, pure and simple

I agree that it's simple [STUPID] racism.

The whole tea party and birther movement are racists, plain and simply put. All I refer to them as are the racists. They don't even deserve a designation.
I personally think it's sick and disgusting.