A MUSEUM featuring Hitler that allows visitors to dress up in Nazi uniforms and pose with swastika flags could open in Ukraine.

The city of Vinnitsa is hoping to turn the Wehrwolf bunker - where Hitler stayed during WWII - into a tourist attraction, the BBC reports.

The museum had been due to open in May to coincide with the commemoration of victory over the Nazis.

Kateryna Vysotska, who works at the Vinnitsa Museum, said the bunker would also serve as a memorial for victims. 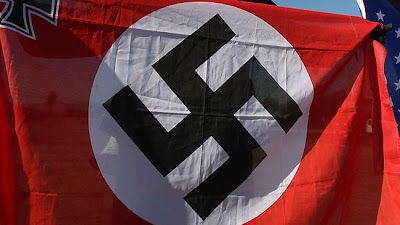 Lydia Zakusylova, who chairs the regional Communist Party, told the BBC a road sign pointing to the location of the Wehrwolf already has neo-Nazis flocking to the site.

Ms Zakusylova said initially there were suggestions to restore wartime dug-outs for PoWs, but then she was told about plans to exhibit uniforms and flags of the officers and men of the Reich.

"They wanted to offer tourists the chance to try on uniforms, hang sub machine-guns around their necks and pose for pictures with Nazi flags in the background. This is blatant Nazi propaganda," she told the BBC. Wehrwolf - ruins of Hitler's headquarter near Vinnytsia. Picture: Varga Attila / Wikipedia
The 10,000 PoWs and local civilians who are believed to have built the bunker were allegedly shot by the Nazis and buried there.

Local villagers, including children, were enlisted to dig trenches and clear out the woods.

Ms Vysotska said she met with veterans and told them that the bunker has become a tourist attraction irrespective of their wishes.

"Visitors will keep coming and it would be better if our museum staff conduct proper guided tours," she said.

In April, 2010, a museum celebrating Nazi Germany's SS opened at its former leader's headquarters in Wewelsburg Castle in Paderborn, Germany.

When I saw the title of this post, I thought this was some kind of joke. But then I read it..... OMG! You would think that this idea would have been thrown out as soon as someone proposed it. It is totally beyond my comprehension how anyone in the Ukraine could let this happen!

QH - a rational person would think it would get thrown out but clearly they ain't that rational in the Ukraine.....

While I think we need every chance we get to remember Hitler and what he did and what was done in his name, a museum sounds a little celebratory.
And then the description of the museum--allowing people to dress like Nazis--is disgusting.
A true representation of the man would be his picture, followed by pictures of the millions murdered at his instruction.