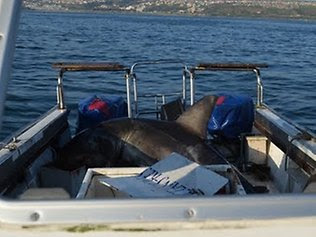 MARINE scientists studying sharks in South Africa got closer to their subject than they expected - when a great white jumped out of the sea and into their boat, according to reports today.

Six members of Oceans Research organisation were collecting data on sharks in Mossel Bay, 388km west of Cape Town, when the 3m shark leaped out of the water and landed on the boat's fuel and bait storage containers.

"Activity around the boat ceased and all was pretty quiet at the stern," team leader Dorien Schroder told the Cape Times.

"Next thing, I hear a splash and see a great white breach out of the water from one side of the boat hovering, literally, over a crew member chumming on the port side."

The crew backed off, hoping the shark would find its way back to the water - but the 500kg animal panicked, cutting fuel lines as it thrashed about.

After radioing for help, the scientists poured water over the shark's gills to keep it alive, and tied a rope around its tail in an attempt to pull in back onto the ocean

When that didn't work, the boat was eventually towed back to harbour and the shark was lifted back into the water with a crane. But, unable to navigate out of the harbour, it beached itself half an hour later.

A team led by Oceans Research's co-director, Enrico Gennari then tied ropes to the shark's tail and pectoral fins, and slowly towed it out to sea, where the fish recovered and swam away, according to The Guardian.

Mr Gennari said the incident was the first time he'd heard of a great white jumping onto a boat, but said the fish could have mistaken the boat's shadow for prey or been disturbed by another shark.

"It's all speculation," he said. "But sometimes a shark breaches the surface when it feels another shark underneath it. They (move) like a flying fish and end up several meters away."