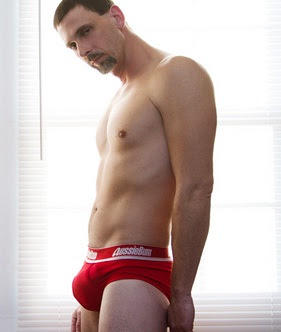 This man with the good looks and looky goods is one of the wisest writers I have encountered..... and here is why.........

Most bloggers - myself included - often write or blog for the attention we know it will give us. And that isn't a bad thing. Everyone likes to have people attend to their thoughts and give feedback which strokes their emotions - and their ego. Nothing wrong with that. It's honest and we all know what is going on.

What Tony does, however, is write about himself and those things / events/ people in his life whilst actually attending to YOU the reader. And this is the mark of a very clever and smart writer. There is not a hint of "look at me look at me" when he writes. It is a very honest and very close look at him and his life.

I also love the "a-ha!" moments that he is currently experiencing in his relationship and, again, how honestly he tells. Here is the latest example of that...titled "Blind Man's Fluff".......

It’s funny what your hands can teach that you thought your eyes already did.

I didn’t even realize clouds had rolled in. It had been a really sunny day. I thought it was getting dark just because it was close to night fall.

There weren’t even warning winds that usually come with summer storms.

Just a big clap a thunder and the skies opened up with a gully-washer.

And the power went out.1

Had it not been for all the lightning, I would have grabbed the Attorney and run with him out into the rain.

After about half an hour of waiting it out in candle light, we got Granny to bed. But, the lighting was still a little crazy, so we went to watch it from one of the upstairs windows.

Eventually the rain subsided and the light show faded away, leaving us in darkness.

Even though I have been walking through this house for more than 20 years, I still had to shuffle-stepped and feel our way to my room with The Attorney in tow, holding on to me.

It was way too dark to do anything else, so naturally we started fooling around.

It was like being at a middle-school aged party “Two Minutes In Heaven,” only we were on the bed instead of in a closet.

And for a lot more than two minutes.

And I didn’t have to try to fight my way into a bra.

Or anywhere, for that matter.

But there were probably just as many discoveries.

For example, somehow in four and a half years I never realized before how muscular The Attorney’s back is.

Or how long one of our noses really is because we touched faces sooner than expected when going in for a kiss.

We have certainly had lights-out sex before2 but there was always at least ambient light from another room or a digital clock or the moon or something.

But in the murky pitch black, your other senses ramp up into bionic level. Every sound makes you taut; every smell males tingle; every taste make you tremble, every touch takes your breath away.

While the storm outside was intense, there aren’t words for the one that happened inside.

But maybe it’s time to see about getting the breaker box relocated to bedside.

Dear Tony, I love your blog and it inspires. Thank you so much for taking the time to write it and allow us the glimpses into your life that you so graciously share.

I can see why they call him "Large" Tony.

Nice that you are doing this.

I'm going to check his blog out!