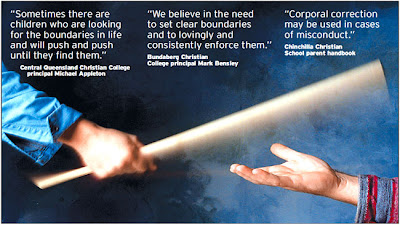 REVELATIONS that corporal punishment is still being used in some Queensland schools has renewed calls for a complete countrywide ban.

Child welfare advocates say it is a breach of human dignity and children should not be deliberately hurt at school.

But the Queensland schools administering it say it is part of a discipline policy that works, is supported by parents and is about care and not intimidation.

Child welfare campaigner and former NSW politician Alan Corbett said he was horrified to discover the cane and paddle were still being used at some schools after he pushed for them to be abolished in NSW.

A Courier-Mail investigation has found at least three schools that continue to use corporal punishment and another three that have only recently moved away from the practice.

All were Christian schools.

Mr Corbett, who now lives in Bundaberg, said research showed corporal punishment could cause long-term harm to some children and called on the State Government to ban it.

"We are talking about school students who are being deliberately hurt by an adult with whom they should be able to feel safe with at school," he said.

Mr Burke said the union, which also represents teachers in the Northern Territory where caning is not banned, said the practice was inconsistent with general community standards over the punishment of children in schools.

"Schools should look at the practice in light of general community standards and introduce practices which reflect those standards," he said.

"We endorse the general community's view on this."

News.com.au has received several claims that a South Australian school which which takes public money from both the state and federal government, Craigmore Christian School, used corporal punishment.

Former students who contacted News.com.au claimed the school, which takes students from kindergarten to year 12, still enforced discipline with paddling on the buttocks which was followed by prayer sessions.

A policy paper on behaviour management on the schools website states the school uses corporal punishment but does not specify what form the punishment takes.

School principal Dominic Hopps said the practice was no longer used at the school but confirmed it had been used in the past.

"It was part of the way the school operated in the past but I can categorically deny it happens now," he told News.com.au

The South Australian Government removed provisions allowing corporal punishment form the State's Education Act in 1991 but did not specifically ban the practice.

Corporal punishment was banned in state schools in 1995 and is not used in the Catholic sector, and each State and Territory also has varying bans in place.

NSW: Banned in all schools

Tasmania: Banned in all schools

Victorian: Banned in all schools

South Australia: Legislation amended to remove any mention of corporal punishment, but practice not specifically ruled out.

Queensland: Banned in government schools only

ACT: Banned in all schools, with provisions

Northern Territory: No ban, but parents have to give permission

Central Queensland Christian College principal Michael Appleton defended the punishment and said: "Sometimes there are children who are looking for the boundaries in life and will push and push until they find them."

Caloundra Christian College and Rothwell's Mueller College said they were moving away from corporal punishment in line with community attitudes.

............Seriously - can these people please just kiss my fat hairy jewish CANED arse..... We are already SO soft on kids .... aka "Don't make me give you a time out and have us talk about this!" - these are the same parents who bring up their kids as vegans, hidden from sunlight, and then wonder why their kids are pale, wheezy, calcium deficient twigs who break a bone when they sneeze and are allergic to EVERYTHING including a sense of humour....

do you have a spare bucket!
Corporal punishment... bring it back I say. I get sick of the "time out" and "lets talk about this" junkies. This approach only reinforces acting out behaviour. To a kid any attention is good attention! There are generations of parents that missed out on a good caning at school and look at the results they have gained with their rude and undisciplined children. Cane them all I say... Starting with the parents...