Our state leaders here are usually called Premiers.  But we have to Territories where they are referred to as Chief Minister. 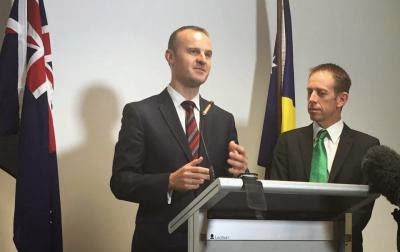 Andrew Barr today became the first gay government leader after he was sworn in as chief minister of the Australian Capital Territory (ACT). He won yesterday's leadership ballot unopposed after the incumbent leader quit last week and said he would use his position to advocate for gay marriage.

During his emotional acceptance speech at the ACT legislative assembly, the Labor politician turned to his partner in the gallery and said, 'Anthony, I love you. 'I look forward to the day when we can legally marry in this country.'

In a press conference after the speech, Barr reiterated his plans to campaign for gay marriage. 'It is quite ironic that you can be elected chief minister but you can't marry your partner of 15 years,' he said. 'It's time that this discrimination is ended in this country and I will continue to be a loud and passionate voice for that change.'

Marriage equality advocates said it was a 'disgrace' that Barr could be a head of government but could not marry his long-term partner. 'It's an historic moment for the territory and the nation to have Andrew Barr as Australia's first openly-gay head of government,' said Ivan Hinton-Teoh, deputy director of Australian Marriage Equality. 'It sends the message to young gay Australians that they too can aspire to the highest offices in the land and not be limited by old stereotypes and prejudices. 'But it's a disgrace that someone who is soon to have the responsibilities of being Chief Minister still does not have the right to marry his partner.'

Tomorrow will be the first anniversary of the high court decision which struck down the ACT's groundbreaking Marriage Equality Act, effectively terminating the 31 marriages of same-sex partners which were performed under that act.

That is great news! A out and proud gay Chief Minister. Lovely, truly lovely.

So those 31 couples who married in good faith had the rug pulled out from under their feet? Bah-humbug! Horrid, evil and cruel to do such a thing.