I Do Not Believe In Gay For Pay

**DISCLAIMER - this is MY considered opinion based on my experiences in a professional setting and in my personal life.  This is not me saying "this is how it is and no other opinion on this issue is valid."**

From 1992 - 1999 I was active in the health industry in a variety of ways.
I volunteered at our Gay Men's Health peer organisation, I was employed by the State funded advocacy organisation for the Sex Industry.  And I was employed in Young People's Mental Health.
I was also involved in several pieces of research, one of which was a national research initiative into the sexual activities and identifies of Men have Sex with Men (MSM's).

The main section of the research initiative looked deeply into sexual identity/experience and how it compared the topics of Social Identity versus Sexual Practice.  There was a very strong trend that identified a disassociation between how a surprisingly significant percentage of how men IDENTIFIED their sociality, and how they PRACTICED their sexuality.

The majority of men clearly identified as either gay or bisexual.  But the part of the research that was cloudy was this issue of men who didn't identify as gay or bisexual and yet engaged in sexual activities with other men.  The difficulty was that when these men were asked how they labelled their sexual identity, they didn't hesitate to call themselves heterosexual.  Now, given that they regularly engaged knowingly in homosexual sex, this caused no small amount of confusion.

When placed in context, researchers from the project had to consider a new term for Men who have Sex with Men - Heteronormative.  Heteronormative men are those who identify their social matrix - their life with their friends and family - as Heterosexual.  But, these Heteronormative men had a sexual matrix of activity that were clearly homosexual to varying degrees. Together, these two matrixes would mean these men would be classed as Bisexual.  This was reached by also considering the very accurate Kinsey scale.  Here are two examples of the scale below.

I do find the caricatures in the second image a little amusing.  Not entirely accurate, but amusing. 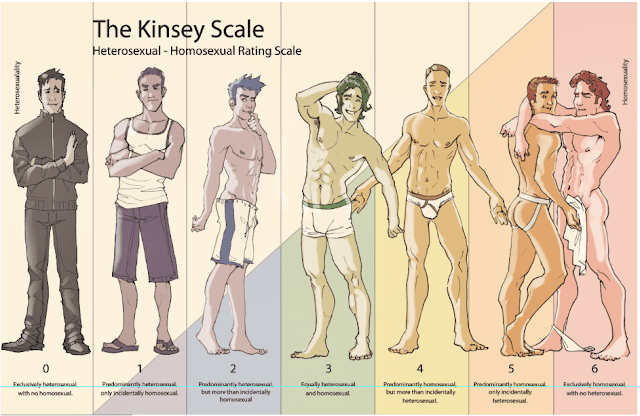 I believe Gay for Pay men are all Kinsey 1's.  Predominantly Heterosexual, only incidentally Homosexual.  One could almost call them Bisexual-Lite.

I have had many heterosexual friends.  Even back when I was dancing, there were many heterosexual men in ballet.  Far more than you would think.  NO exclusively heterosexual man would have sexual relations with another man.  "AHA!"  I hear you say.  "But what about those guys who get dared to kiss another guy and they do it? That is on YouTube all the time!"  I would say they take a dare very bravely.  But dare that same guy to lick another mans' arse - they'd start to dry heave.

We live in a world where we now have terms such as Pansexual and Sexually-Fluid.  Ultimately, if I consider the research I myself have been involved with, and the studies I have read, I would say that they are cool names for Bisexuality.  Just like Cisgender is a cool name for a person of one gender who agrees they are the gender they were born in (This term in my opinion is completely unnecessary, but that is a whole other blog post).

For me, I get angry when I hear someone refer to themselves as Gay for Pay because it cheapens what took me and so many others such time, effort and emotion to come to terms with.  They "Gay Experience" is so much more than putting a cock in your mouth or arse.  It is a process of self realisation that can be both traumatic and life changing.  If $$$ could switch a sexuality on and off, then I would have whored myself out to the many rich women I came into contact with during my time as a dancer and I would have lived MUCH better than I did.  But no, I couldn't.

So the Gay for Pays?  They are a Kinsey 1.  They are Heteronormative.  Predominantly heterosexual, but only incidentally homosexual.  In other words - Bisexual-Lite.

I'd love to hear yours via the poll in the right hand column.

What do you think?

Thank you and Shalom to you all.

Voted for the last option. Bisexual, that's what I believe most of people are. Some choose the other sex, some don't. It really depends.

I have long believed that bisexuality is the majority, and not heterosexuality. My experience has made me say the percentage is 50% Bi, 25% Straight, and 25% Gay.

What makes it appear that heterosexuality is the norm is that the majority of bisexuals run a 1 - 3 on the Kinsey scale. Therefore, have a primary partner of the opposite sex.

So I'm the minority of bisexuality being a 4, or maybe just scratching a 5.

I agree with Anon. There is still a stigma attached to being gay, and so it's not surprising that these actors pretend that they are straight. But if they were really, truly totally straight they would be unable to perform any sort of sex with men at all, much less in front of the camera. If I were asked publicly (where my real name were disclosed) about my place on the Kinsey scale, I would say that I'm straight, but the reality is that I'm more like a 2.