Oh yeah - THIS is the state of racial relations in America.  Ugly.  Obvious.  Unexpected.  Still disgusting.

Reprinted from Towleroad - Link in sidebar.

There was an ugly moment today at a Donald Trump rally in Birmingham, Alabama when a black protester was tackled, punched, and kicked by a group of white Trump supporters as Trump yelled “get him the hell outta here.”

CNN reporter Jeremy Diamond, who filmed video of the incident and posted it to Twitter, said, “At least one man punched the protester and a woman kicked him while he was on the ground…The protester appeared to be shouting ‘black lives matter’ and later removed his sweatshirt to reveal a shirt with those words. At least one attendee shouted ‘all lives matter’ as the protester was eventually led out by police officers on the scene.”

At the rally, Trump also repeated his calls for surveillance of mosques.


Yes - THIS is the man you want representing America to the world.  Oh for fuck sakes.
The stoopidz need to be corralled into pens and fed lithium.

Stick a fork in me I am done. 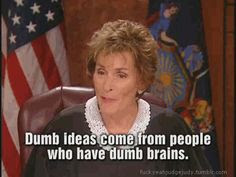 Dude, I was watching this video in 240p and I clearly saw some black dudes around and another one kicking him out.

Its not about being black - its about a PRESIDENTIAL candidate not intervening when a person at their event was being BEATEN. AND they basically endorsed the beating.

Donald Trump is an idiot.

The man is a national embarrassment....expect he will self-destruct before long, but there are many here who are motivated to make sure he exits the stage soon. Judge Judy says it well. Thanks for posting.