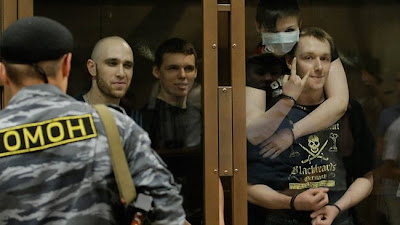 FOUR Russian neo-Nazis were handed life sentences on yesterday for the murder of 27 youths in a 2007-2008 spree that shocked Moscow and led to tougher hate crime laws.

The court also convicted several of the 13 gang members of terrorism for plotting a suburban Moscow train station bombing that was uncovered in time by the police.

The court handed 10- to 23-year prison terms to eight members of the group while one person received a suspended sentence for cooperating with the investigation.

The Nationalist-Socialist Society was a legally registered organisation when it began its hunt on young ethnic minorities who arrived in the Russian capital from southern Muslim republics and the Central Asian states.

Russian media reports said at least one of the attacks was videotaped then distributed on Russian nationalist websites.

An outcry from human rights groups over these and similar attacks prompted the Kremlin to call for a review of Russian nationalist groups' links to hate crime.

The Kremlin had initially provided informal backing to some of these organisations as part of its drive to improve young people's interest in politics.

The Nationalist-Socialist Society was formally banned in February 2010 and several similar groups have since been forced to disband.

But they maintain a strong presence on Russian social media networks and often manage to bring out large numbers of supporters for protests outside foreign embassy in times of diplomatic tensions with the West.

Monday's hearing received national media attention and saw the group walk into court chanting neo-Nazi and anti-Semitic slogans and repeatedly jeering the judge from the dock.

One member of the gang wore a black t-shirt with a skull and bones while others wore surgical masks to hide their identities. Several had shaved heads.

The father of one of the defendants broke down in tears after the verdict while the group chanted in unison: "Our conscience stands above the law."

The neo-Nazi leader had pleaded not guilty.

"This ruling was simply not objective."

Her client -- a 21-year old unemployed man identified as one of the senior gang members -- received 20 years behind bars.

A recent spike in ethnic violence prompted the Russian authorities to crack down on neo-Nazi groups and ban some organisations that had operated in the open for years.

The rise in ethnic tension in Moscow and other major cities spilled over in December when a massive riot broke out near the Kremlin following the murder of a nationalist supporter of a Moscow football club by a Muslim suspect.

Russian Prime Minister Vladimir Putin later raised eyebrows by visiting the grave of the slain football fan in the company of several nationalist organisations that took part in December's rioting.

But both he and President Dmitry Medvedev have identified racism as one of the country's more pressing social concerns and chaired various meetings designed to address Russian xenophobia.

It really is shocking that such things can happen in what we all think of as a civilised society.

It's tragic consequences will last lifetimes for the relations of the victims.

Thanks for sharing this.

I didn't know Russia was that bad

Regretably anti-semitism is on the rise in Europe.

Russia is one thing - they ARE crazy. But look at Hungary and you see the good old fascism on the rise, it already reached the parliament. Europe faces a far right problem. Serving all the old standard prejudices: anti - semitic, - gay, - liberal, - humanist, anti-everything. It will become bitter here.