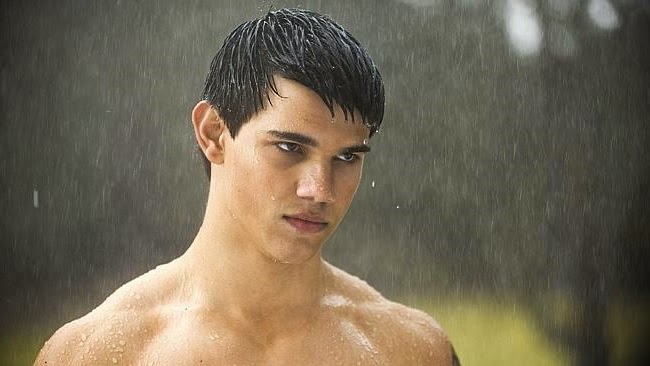 
TWILIGHT hunk Taylor Lautner has split from his girlfriend a month after being photographed at two LA gay clubs.

Lautner had been dating his Tracers co-star Marie Avgeropoulos for a year and a half
However sources told E! Online that the couple had ended their relationship.
“It was completely amicable,” the source said. “Taylor is dating and having fun. Nothing serious.”
It comes a month after Lautner was spotted at two Hollywood gay hot spots — The Abbey and Mother Lode.

He was photographed with gay model Murray Swanby, who posted a picture of the pair to his Instagram, along with the caption “I’ve never been more #attracted to someone in my life.”
A source told RadarOnline that Lautner is a regular visitor to the LA hot spots but left early after the crowd recognised him.

“Taylor was definitely trying to be incognito it looked like, but everyone there was staring at him,” the source said. “I think he left because people kept asking him for photos with him and he declined.
“It was not the first time that he was reportedly seen at gay bars in LA, as I have friends that claimed to have seen him out in the past year on other occasions,” the source said.
There has been rumours of Lautner’s sexuality for years despite him being linked to a number of women, including Taylor Swift, Lily Collins and Selena Gomez.

Taylor and Taylor ... Swift and Lautner in a scene from Valentine’s Day. Picture: Supplied. Source: Supplied

Searching for the Best Dating Website? Join to find your perfect match.

If you want your ex-girlfriend or ex-boyfriend to come crawling back to you on their knees (even if they're dating somebody else now) you got to watch this video
right away...

(VIDEO) Why your ex will NEVER get back...